WheatRescue is a unique blend of powerful digestive enzymes and probiotics designed to support optimal gluten digestion and protect against hidden sources of gluten. DPP-IV and Tolerase G are specific enzymes that assist in the breakdown of glutenin and gliadin proteins, which can help alleviate symptoms associated with dietary gluten intolerance and sensitivity. WheatRescue combines resilient probiotic spores with superior digestive enzymes to support the complete digestion of gluten and other inflammatory wheat-derived peptides within 60 to 90 minutes.

Skip to the end of the images gallery 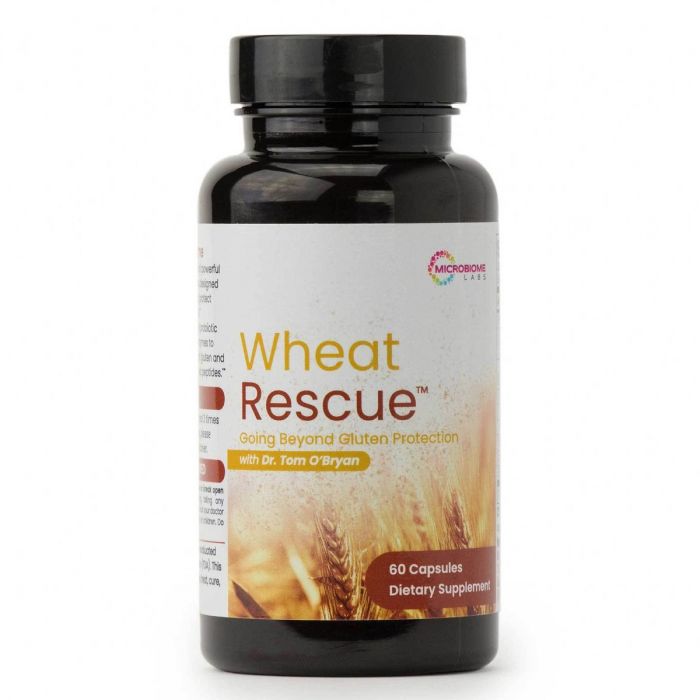 Skip to the beginning of the images gallery
Details

Gluten is a combination of two storage proteins, glutenin and gliadin, that are found in the middle layer, or endosperm, of various cereal grains. Normally, the pancreas secretes digestive enzymes, like proteases and peptidases, to help break down proteins like gluten. However, imbalances in gut bacteria and the normal aging process can limit the body’s natural ability to produce these necessary digestive enzymes.

There’s no denying that gluten is problematic for many people. Many doctors will suggest a strict gluten-free diet, but recent discoveries have revealed this may not be enough. New research suggests that the small intestines of up to 60% of adults with celiac disease never completely heal despite following a gluten-free diet.

A combination of probiotic spores and yeast can effectively support intestinal health and barrier function. Saccharomyces boulardii is a probiotic yeast that can help support digestive health by producing lactate, B vitamins, and targeted antimicrobials to defend against pathogenic gut infections. S. boulardii has also been shown to be immunoprotective through the upregulation of IgA and IgG secretions in the intestines. Bacillus coagulans and Bacillus subtilis are spore-forming probiotics that are naturally designed to survive digestion, support intestinal barrier function, and enhance the microbial diversity of the gut microbiome.